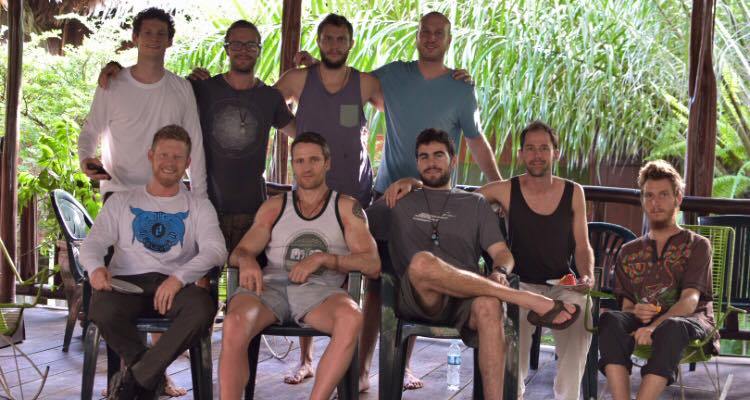 How to summarize the ayahuasca experience? If I was Shakespeare I couldn’t come close, but here are my meager 10 attempts.

1. It was as if Mother Ayahuasca (you will hear this commonly when working “the medicine”, if you call it “a drug” around me, I will correct you, just FYI). Our incessant need in the Western world to label everything “a drug” that alters or elevates consciousness is counter-productive. ANYWAY, it was as if Mother Ayahuasca held in her hand everything that encapsulates my reality: {my sadness, depression, my ideals, goals, cultural idols, my attachment to status and appearance, what I think gives life meaning} and it was the size of a small stone, and she turned around and chucked it into a vast ocean. Then she gave me a look like Now what are you so worried about?

2. Sitting here now, 2 weeks after arriving home from the Amazon Jungle, I think of a lake about 5 square miles in surface area and it is as if the insights and lessons from the medicine have been dropped and scattered across the lake, sinking to various depths or floating at the surface. My task now in life is to fish each and every lesson out of the lake. Obviously this will take effort, persistence, and focus and many months to even years to complete.

3. Ayahuasca unlocked my heart, like only she had the precise key and combination and let all my repressed emotions come to the surface: anger, sadness, self-hatred, love and positivity at a level that I previously didn’t know I was capable of.

4.  Ayahuasca showed me what was behind a door that can be opened when I am disciplined enough to listen and focus in a higher consciousness. My life will never, ever be the same, having knowledge of what lies behind that door.

5. Ayahuasca showed me that love is a force, a tangible energetic force with incomprehensible power that surely has the strength and magnitude to counter the forces of evil, shame, and selfishness.

6. I was able to view every important relationship in my life, from birth to present on a projector screen of my mind’s eye (NOT visions, NOT hallucinations, but an objective evaluation: conscious, self-directed, fully present with every cell of my body). I felt my heart (literal physical energy emanating from my chest/heart) connect with each and every one of these people and see them, but see them after being infused with a massive dose of empathy. Anyone who I was angry with me or I had to come to resent, I was able to see clearly the way my actions brought that reaction out in them. I saw my dad’s pain, my brother’s pain. I intuitively understood that they aren’t intentionally malicious or hurtful. I saw my part in inciting negative reactions in people. They are hurt and they need to be understood and loved. I cried for 3 out of the 4 Ayahuasca ceremonies. They were tears shed at the years squandered, relationships ruined, how short-sighted I have been. They were tears of pure love, of gratitude, of sorrow, of bliss, of pure energetic expression.

7. Common, repeated metaphor: 10 years of psychotherapy in one week. Also-like planting a tree in your soul that will take care, watering and nourishment to grow.

8. “What we do here is restore you to factory settings”

9. A one million Kilobyte zip file was uploaded my mind in the process of those 4 Ayahuasca ceremonies, and I will spend anywhere from the next few months to the next few years decompressing the astounding magnitude and volume of what was downloaded to my mind those four nights.

10. I felt like a pregnant mother for the length of that week, the smallest provocation, of positivity, or negativity and I was in tears. The tears were mostly a cause for celebration, even when I was lamenting actions that regret, absent life I have led up to now. It was the biggest sigh of relief and satisfaction to have this repressed sorrow ripped out of my heart and to be able to express sadness I forgot I even had.

When I got home and told my sister and brother-in-law and I had given them the schict that I had “seen the light” and a whole world had been opened up to me, my brother-in-law Mike said “So are you going to move to a commune in New Mexico now?” I laughed, and thought, the fact that I could literally do that and not feel like I was disappointed anyone or myself, is a miracle.

My cousin said “Pete, its like your a free-love hippie from the 60’s now” and before I might have taken offense, but now that’s the greatest compliment someone can give me. I’m not magically healed 100% and anyone who says that Ayahuasca did that for them is full of shit. You wouldn’t notice an immediate, profound change just by being in my presence for a few hours, but there has been a seismic shift in my heart and soul, like tectonic plates shifting hundreds of miles beneath the earth’s surface.

Ayahuasca tuned my brain to a channel of higher consciousness that having experienced it, knowing that level of consciousness, energetic vibration and connection with humanity exists, my life will never be the same, and it couldn’t. It feels as if the universe has let me in on secret treasure. I am eternally grateful to have taken this sacred sacrament put on this earth by a divine intelligence.

Disclaimer: The correct term for the plant medicine Ayahuasca is “entheogen”- it is derived from Greek. It is literally translated as “generating the divine within.” So when you have a discussion with people on this subject, do me a favor and the person you are speaking to: leave your cultural programming and internalization of American propaganda at the door. The words “Psychedelic”, “drug”, and “hallucinogen” do not apply to Ayahuasca, they are a way for the limited Western medical model to reduce something down to its own insular conception of healing. I am infuriated to read articles by people who claim to be professional journalists that call taking Ayahuasca “getting high” i.e. a girl who writes for Business Insider. Oh man, how can the Silicon Valley magnates gain that ever coveted edge in the tech industry?? How can this supercharge my earnings bottomline??

Having experienced 4 ceremonies in 8 days, I can tell you there is absolutely nothing fun or recreational about Ayahuasca, it forced me to re-examine every action, relationship in my life and turned my entire world upside down. It effectively shattered my reality as I knew it and showed me reality as it truly is: infinite, divine, pure energetic vibration.

Ayahuasca stripped down all the petty, narcissistic filters I view the world through. I saw the vast infinity of cosmic energy and felt a connection in my heart to the divine source of all things. But for most people that ask me that I’m not close with, I’ll say “It was great, I loved the Amazon.” and leave it at that, because to spend too much time explaining it to closed-minded and cynical people serves to further diminish the experience for me.  Having to constantly reduce down to words an experience that is ineffable, galaxies beyond words, is unproductive

Many think that because we in America are white and rich and civilized, “not like those primitive indians in the Amazon” that our doctors know best. Regardless of the fact that doctors in the United States barely even get an education in nutrition and gut health and preventative medicine through diet. Hospitals feed you what amounts to airplane food and basically kill you through with radiation in treatment for cancer and there is no discussion of any other modes treatments.

Does the propagated Western model of medicine have healing and lasting health as its number one motive? We’re all aware enough to know that every “industry” in the U.S. is run by money and only money. People’s lives are secondary to money. Just like having a Military budget greater than half the countries in the world’s GDPs combined.

How many American soldiers have made the ultimate sacrifice for the cowards in the White House? And how complicit are we the people of the U.S. in condoning the meddling in every other country in the world’s politics to prop up our interests and put money in the pockets of oil tycoons and murderer’s like……well who am I kidding, every President in the history of the U.S. is a murderer. It’s all funny, because I get to debate and be a righteous partisan asshole who doesn’t actually give a shit about real problems in the world, only about being right and righteous, like the Twitter shame mobs, and “social justice warriors”.

I live in New York.